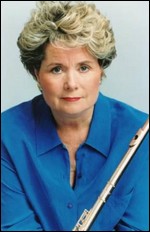 Susan Milan was born in London, the daughter of civil servants. Between 1958-63, she became a Junior Exhibitioner at the Royal College of Music. During 1960 to 1966, she was a member of the London Schools Symphony Orchestra. From 1963 to 1967, she was a scholar of the Royal College of Music, graduating with honours, where she later become a professor of Flute in 1984. From 1966-72, she attended Marcel Moyse master classes in Boswil.

In 1967, she was awarded a Countess of Munster Scholarship to study as a Post Graduate under Geoffrey Gilbert at the Guildhall School of Music. After graduation in 1968, she was invited to become Principal Flute of the Bournemouth Sinfonietta. In 1974, she made musical history by being appointed the first woman principal and member of the Royal Philharmonic Orchestra where she remained for eight years. Since then she has sustained a multi-dimensional career as an orchestral guest principal, chamber musician, soloist, recording artiste, composer, author, teacher, lecturer and entrepreneur.

In 2001, she was appointed Artistic Director of Woodwind for the Evergreen Orchestra, Taiwan. In 2007, she was appointed Adjunct Professor of Music at Henan University, China, and founded the Charterhouse International Music Festival for outstanding young musicians.

In 1979, Milan released her first solo recording on the ASV label. This was followed in 1981 by a second solo recording on the Hyperion label, and contracts with Chandos (1990) and Upbeat (1990). 1997 saw the issue of the Master Classics Archive Series of historic flute recordings featuring Milan. Described as the “Queen of the Flute” by journalist Huang Hua,[2] Milan has recorded concertos, duos and chamber music recitals for the Hyperion, Da Capo, Omega, Cala, Metier and ASV labels. She has further recorded more than a dozen recordings of concertos and recitals for the Chandos label including three collections of French repertoire. She has also made recital recordings of French Impressionist composers (Saint-Saëns, Debussy, Boulanger, Ibert, Dutilleux, Poulenc and Feld) for Upbeat Records and Master Classics.

Her most recent recording of contemporary British works for flute and piano, with the pianist Andrew Ball, was released on the Metier label in 2008. She has also recorded the Schmidt Concerto by Ole Schmidt with Schmidt conducting, for the Da Capo label. In 2010, she began recording the Simpson Concerto for Hyperion.

Recent commissions have included a concerto from the American composer Keith Gates, “Oiseau Soleil” for flute and piano by the French composer Jean Sichler, “The Moon Dances” by the British composer Cecilia McDowall, “Sonata” by British composer Brian Lock and “Octagon” by British composer Ian Finney. Her accompanist, pianist Ian Brown has worked with Schering, Rostropovich, Galway and other famous classical musicians.

In the chamber music field, she formed The London Chamber Music Group (featuring flute, oboe, violin, viola, cello, piano and harp). With members of the group, she recorded the chamber music of Eugene Goossens for the Chandos label. She has also performed with The Debussy Ensemble, Weber Ensemble and Milan-Ball Duo. Susan formed the Milan Trio, with her second son, cellist Christopher Jepson, and the pianist Andrew Ball, and performs with the Instrumental Quintet of London, for flute, string trio and harp, with Nicholas ward, Matthew Jones, Sebastian Somberti and Ieuan Jones.

In 1992, Milan researched and published 19th century repertoire for Boosey & Hawkes. Several technical books followed including two technical scale books in 2000, and a handbook of programme notes, for flute performers in 2006. She is presently restoring a collection of historic [78”] recordings of flautists from 1910–1945, to be issued on the Master Classics label.

In 1960, she was presented with the Royal College of Music's Evekisch Prize by Sir Malcolm Sargeant. In recognition of her achievements, she was elected President of the British Flute Society in 1990 until 1995. She was awarded a Fellowship of the Royal College in November 1999 which was presented to her by HRH Prince Charles. Milan is listed in the New Grove Dictionary of Music and Who’s Who in Music, and is a Patron of GAMPA, BASBWE and the Association of Woodwind Teachers.

This article uses material from the article Susan Milan from the free encyclopedia Wikipedia and it is licensed under the GNU Free Documentation License.

Johann Sebastian Bach Konzert für Violine, Oboe und Streicher d-moll BWV 1060
Update Required To play the media you will need to either update your browser to a recent version or update your Flash plugin.