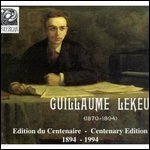 Lekeu was born in Heusy, a village near Verviers, Belgium.[1] He received his first lessons in piano and music theory from Alphonse Voss, the director of the brass band at the local conservatory. In 1879, his parents moved to Poitiers, France.[1] There he was introduced to the music of Beethoven and Bach by his physics teacher Alexandre Tissier, who was also an amateur musician. He continued to pursue his music studies independently while at school, composing his first piece at the age of 15.[1] From 1885 he regularly composed new music,[2] especially for piano, and studied harmony and violin from 1887 under Octave Grisard.

In June 1888, his family moved to Paris where he began to study philosophy.[3] He was introduced to the works of Téodor de Wyzewa and continued his studies under Gaston Vallin. In August 1889, he traveled to Bayreuth to see Wagner's operas. On his return, he studied counterpoint and fugue privately with Cesar Franck.[2] Franck encouraged him to continue composing, and they became good friends. After Franck's death in the autumn of 1890, Wyzewa introduced him to Vincent d'Indy, who taught him orchestration and encouraged him to compete for the Prix de Rome, awarded in Brussels.[1] In 1891, he won second prize in the Prix de Rome for his cantata Andromède.[2]

In 1892, d'Indy introduced Lekeu to Octave Maus, then secretary of Brussels-based Le Cercle des XX.[2] There, he conducted several of his works and met the eminent violin virtuoso Eugène Ysaÿe, who commissioned a violin sonata from him.[1] This Violin Sonata in G Major premiered in March 1893. Critics considered it a worthy successor to compositions by Franck and Fauré, both in A major. This sonata is still considered Lekeu's masterpiece.

Having contracted typhoid fever from a contaminated sorbet in October 1893[4] he died in his parents' home in Angers, on 21 January 1894, the day after his 24th birthday. On 26 January 1894, Guillaume Lekeu was buried in a small cemetery in his home town of Heusy.[3]

Lekeu's personal style was present in his earliest compositions. In 1887, he said "Bien plus, ce sera bizarre, détraqué, horrible, tout ce qu'on voudra; mais, du moins, ce sera original"[4] (Even more, it will be weird, crazy, horrible, anything you like, but at least it will be original). Beethoven provided the inspiration for the composition of Lekeu's string quartets, and exposure to Wagner's operas at Bayreuth influenced his approaches to melody. He described this as "des mélodies de telle longeur qu'un seul exposé suffisait à parfaire ... un morceau de musique"[4] (melodies of such length that a single presentation was sufficient to complete ... a piece of music). Nonetheless, his primary influence was Franck. Lekeu also wrote less somber works, but many are characterized by a certain melancholy. As he wrote, "la joie [est] mille fois plus difficile à peindre que la souffrance"[4] (joy is a thousand times harder to paint than suffering). Although Lekeu died at a young age, at a time when his compositional skills were not yet perfected, his music displays a remarkable maturity.

Lekeu composed about 50 works,but a number of his compositions were left unfinished at his death. Two--a Cello Sonata and his Piano Quartet-were completed by D'Indy.[5] All have been recorded at least once, and several of them more than once, notably the G major Violin Sonata and the C minor Trio. His style, prophetic of early-twentieth-century avant-garde French composers like Satie and Milhaud, was influenced by Franck, Wagner and (especially in the Trio) Beethoven. though these influences did not manifest themselves as mere imitation. His larger compositions are cyclic in structure; that is, themes in his works will often recur from movement to movement, something no doubt inherited from a long tradition of nineteenth-century European composers, as well as from many works of Franck and d'Indy. In general, Lekeu is regarded as a highly talented composer whose death cut short a promising musical career.

This article uses material from the article Guillaume Lekeu from the free encyclopedia Wikipedia and it is licensed under the GNU Free Documentation License.

Wolfgang Amadeus Mozart Klavierkonzert Nr. 19 in F-Dur KV 459
Update Required To play the media you will need to either update your browser to a recent version or update your Flash plugin.