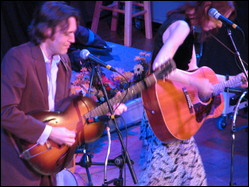 David Todd Rawlings is a professional guitarist and harmony singer. He is best known as the longtime musical partner of bluegrass singer-songwriter Gillian Welch.

He is also known in his own right as a producer, having produced Welch and bands such as Old Crow Medicine Show. He has recently performed under the billing of "The Dave Rawlings Machine". He has also contributed to the Bright Eyes album Cassadaga, the Ryan Adams album Heartbreaker (which opens with "Argument with David Rawlings Concerning Morrissey"), and the Robyn Hitchcock album Spooked.

Rawlings co-wrote the tracks: "To Be Young (is to be sad, is to be high)" and "Touch, Feel and Lose", with Ryan Adams.

David Rawlings achieves his signature guitar sound flatpicking a small archtop guitar. The 1935 Epiphone Olympic that has been his primary instrument was a mid-priced guitar for its time, with a carved arched solid sprucewood top, carved arched solid mahogany back and mahogany sides.[1] It sold for about $35 in 1935.[2] The guitars lower bout measures 13 5/8 inches wide, and it has three piece f-holes [3]

The Dave Rawlings Machine album A Friend of a Friend has a release date of November 17, 2009. Rawlings recorded the album in Nashville, and produced it himself. Co-writers and musicians on the album include Welch, members of Old Crow Medicine Show, Bright Eyes, and Tom Petty and the Heartbreakers.[4]

This article uses material from the article David Rawlings from the free encyclopedia Wikipedia and it is licensed under the GNU Free Documentation License.