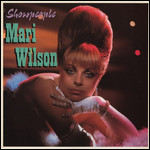 Not to be confused with Meri Wilson.

Mari MacMillan Ramsey Wilson (born 29 September 1954, Neasden, London)[1] is an English singer. She is best known for her 1982 UK top-10 hit single "Just What I Always Wanted" and her 1960s image complete with beehive hairstyle.

Recording on the Compact Records label with her backing band The Wilsations, Wilson scored six UK Top 100 singles between 1982-84. Her biggest hit "Just What I Always Wanted" reached number 8 in 1982.[2]

In 1983, she scored a second Top 40 hit with a cover of "Cry Me a River" (UK #27) and released her debut album Showpeople (UK #24).[2] After this, further commercial success eluded her, though, in 1985, she performed the song "Would You Dance with a Stranger" (theme for the film Dance With a Stranger), and turned her career towards live performances. Although for a while she distanced herself from her beehive days, she started touring with her old songs again in 2007.

In 1992, the album The Rhythm Romance, which combined jazz standards with 1960s songs and original material, failed to return her to the charts. She continued performing with jazz bands, and sang the theme-song to the TV sitcom Coupling ("Perhaps, Perhaps, Perhaps"). Her version of "Cry Me a River" was featured in the 1990s crime drama series McCallum.

In 2005, Wilson returned to recording with the album Dolled Up. This was followed by a compilation of her hits, The Platinum Collection to celebrate her 25th anniversary in the music industry. Apart from pursuing her solo career, she toured with Barb Jungr and Claire Martin as the cabaret act, 'Girl Talk' (though Claire Martin has now been replaced by Gwyneth Herbert).[3]

Wilson has also performed in musicals such as Dusty - The Musical,[4] and has been featured on a BBC Television series about celebrities and their health (she has Type 1 Diabetes).[5]

Her band was known as The Imaginations for their first two singles[6] before becoming The Wilsations,[7] and her backing vocalists were called The Marionettes. Occasional featured artists were Michelle Collins (Cindy from EastEnders), Julia Fordham and bassist 'Thumbs' Cunningham.

Wilson's fourth studio album Emotional Glamour was released on her own Beehive label in October 2008[8] (though she has long ago changed her former trademark hairstyle). She has also written and starred in a one-woman musical, The Love Thing.[9]

As of 2011, Wilson has been working on a new album of covers called Cover Stories, due out in 2012 and funded by public subscription. She also writes a regular blog with updates about it and her life in general.[10]

Wilson is a longtime resident of Crouch End, north London.

This article uses material from the article Mari Wilson from the free encyclopedia Wikipedia and it is licensed under the GNU Free Documentation License.