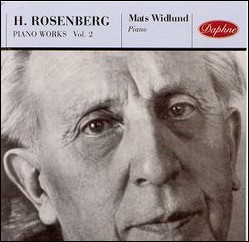 Hilding Constantin Rosenberg (June 21, 1892 – May 18, 1985), was the first Swedish modernist composer, and one of the most influential figures in Swedish 20th century classical music.

Born in Bosjökloster, he was an organist, concert pianist and music teacher until 1915, when he began studying at the Stockholm Conservatory under Ernst Ellberg. His teachers also included Richard Andersson and Wilhelm Stenhammar. After the First World War, he toured Europe and became a prominent conductor.

In 1932 he was appointed musical director of the Swedish Royal Opera. He is best known for his 14 string quartets (1920-1972) and eight symphonies (1917-1974, including his symphony no. 2 Grave, symphony no. 4 Johannes Uppenbarelse, fifth symphony Örtagårdsmästaren and sixth Sinfonia Semplice) as well as Piano Concerto no. 2. He taught composition privately to amongst others Karl-Birger Blomdahl, Ingvar Lidholm, Åke Hermanson and Daniel Börtz.

He died in Stockholm.

This article uses material from the article Hilding Rosenberg from the free encyclopedia Wikipedia and it is licensed under the GNU Free Documentation License.

Edward Elgar Chanson de matin op. 15 Nr. 2
Update Required To play the media you will need to either update your browser to a recent version or update your Flash plugin.