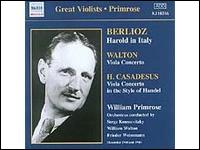 Casadesus received his early musical instruction with Albert Lavignac and studied viola with Théophile Laforge at the Conservatoire de Paris, taking first prize in 1899. From 1910 to 1917, he was the violist of the Capet Quartet.[1]

Along with Camille Saint-Saëns, Casadesus founded the "Societé des instruments anciens" in 1901. The society, which operated between 1901 and 1939, was a quintet of performers who used obsolete instruments such as the viola da gamba, or Casadesus's own instrument, the viola d'amore.

The quintet was also notable in its day for premiering rediscovered works by long-dead composers. It was later discovered that Casadesus and his brothers, notably Marius Casadesus, wrote these works. The Adélaïde Concerto, allegedly by Wolfgang Amadeus Mozart, is sometimes mistakenly attributed to Henri but is actually by Marius.

However, Henri is believed to have been the author of a "Concerto in D Major for viola" ascribed to Carl Philipp Emanuel Bach, described by Rachel W. Wade in her survey The Keyboard Concertos of Carl Philipp Emanuel Bach. This concerto appeared in 1911 in a Russian edition, allegedly "transcribed...for small orchestra by Maximilian Steinberg," and was subsequently performed by conductors such as Darius Milhaud and Serge Koussevitsky, then recorded by both Felix Prohaska and Eugene Ormandy, all under the false attribution. "Thus," Wade wrote in 1981, "at the present time, the most frequently recorded concerto of C.P.E. Bach is a spurious one."[2]

Henri is also credited with the "Handel Concerto" and the "J.C. Bach Concerto," which are both for viola as well. These are often referred to as "The Handel/Casadesus Concerto" and "The J.C. Bach/Casadesus Concerto". Scholarly criticism has confirmed that both these concerti were written by Henri Casadesus in the style of their purported composers.

This article uses material from the article Henri Casadesus from the free encyclopedia Wikipedia and it is licensed under the GNU Free Documentation License.