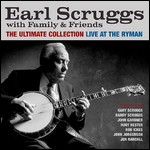 Earl Eugene Scruggs (January 6, 1924 March 28, 2012) was an American musician noted for perfecting and popularizing a three-finger banjo-picking style (now called "Scruggs style") that is a defining characteristic of bluegrass music.[1]

Although other musicians had played in three-finger style before him, Scruggs shot to prominence when he was hired by Bill Monroe to fill the banjo slot in his group, The Blue Grass Boys. He later reached a mainstream audience through his performance of "The Ballad of Jed Clampett", the theme for the network television hit The Beverly Hillbillies, in the early 1960s.

Scruggs was born and grew up in the Flint Hill community[2] in Cleveland County, North Carolina,[3] to Georgia Lula Ruppe and George Elam Scruggs, a farmer and bookkeeper, who played banjo and died when Scruggs was four years old. His older brothers, Junie and Horace, plus his two older sisters, Eula Mae and Ruby, all played banjo and guitar. Scruggs' mother played the organ.[3][4]

Scruggs joined Bill Monroe's Blue Grass Boys in late 1945, and quickly popularized his syncopated, three-finger picking style. In 1948 Scruggs and guitarist Lester Flatt left Monroe's band and formed the Foggy Mountain Boys, also later known simply as Flatt and Scruggs. Flatt and Scruggs became members of the Grand Ole Opry in the 1950s.[5] In 1969, they broke up, and he started a new band, the Earl Scruggs Revue, featuring two of his three sons.

On September 24, 1962, singer Jerry Scoggins, Lester Flatt, and Scruggs recorded "The Ballad of Jed Clampett" for the TV show The Beverly Hillbillies, which was released October 12, 1962. The theme song became an immediate country music hit and was played at the beginning and end of each episode. Flatt and Scruggs appeared in several episodes as family friends of the Clampetts in the following years. In their first appearance (season 1 episode 20), they portray themselves in the show and perform both the theme song and "Pearl, Pearl, Pearl".

On November 15, 1969, Scruggs played his Grammy-winning "Foggy Mountain Breakdown" on an open-air stage in Washington, D.C., at the Moratorium to End the War in Vietnam, becoming one of the very few bluegrass or country-western artists to give support to the anti-war movement.[6] In an interview after his performance, Scruggs said:[7]

I think the people in the South is just as concerned as the people that's walkin' the streets here today ... I'm sincere about bringing our boys back home. I'm disgusted and in sorrow about the boys we've lost over there. And if I could see a good reason to continue, I wouldn't be here today.

In January 1973, a tribute concert was held for Scruggs in Manhattan, Kansas. Among the artists playing were Joan Baez, David Bromberg, The Byrds, Ramblin' Jack Elliott, The Nitty Gritty Dirt Band, and Doc and Merle Watson. The concert was filmed and turned into the 1975 documentary film Banjoman.[8]

Flatt and Scruggs won a Grammy Award in 1969 for Scruggs' instrumental "Foggy Mountain Breakdown". They were inducted together into the Country Music Hall of Fame in 1985. In 1989, Scruggs was awarded a National Heritage Fellowship. He was an inaugural inductee into the International Bluegrass Music Hall of Honor in 1991. In 1992, he was awarded the National Medal of Arts. In 1994, Scruggs teamed up with Randy Scruggs and Doc Watson to contribute the song "Keep on the Sunny Side" to the AIDS benefit album Red Hot + Country produced by the Red Hot Organization.

On February 13, 2003, Scruggs received a star on the Hollywood Walk of Fame. That same year, he and Flatt were ranked No. 24 on CMT's 40 Greatest Men of Country Music.

Still actively touring at age 80, Scruggs performed at the Toronto, Ontario, Bluesfest in 2004.[10]

On September 13, 2006, Scruggs was honored at Turner Field in Atlanta as part of the pre-game show for an Atlanta Braves home game. Organizers set a world record for the most banjo players (239) playing one tune together (Scruggs' "Foggy Mountain Breakdown"). On February 10, 2008, Scruggs was awarded the Lifetime Achievement Award at the 50th Annual Grammy Awards.

Scruggs was inducted into the North Carolina Music Hall of Fame in 2009.[11]

He is the father of Randy Scruggs, Gary Scruggs and Steve Scruggs.

Scruggs died from natural causes on the morning of March 28, 2012, in a Nashville hospital.[13][14][15] His funeral was held on Sunday, April 1, 2012, at the Ryman Auditorium, former home of the Grand Ole Opry in Nashville, Tennessee, at 2pm, and was open to the public. He was buried at Spring Hill Cemetery in a private service.

The Earl Scruggs Center--Music & Stories from the American South opened January 11, 2014, in the historic court square of Cleveland County, in uptown Shelby, North Carolina. The Scruggs Center showcases the history and cultural traditions of the American South, and the unique musical contributions of Earl Scruggs, the regions most pre-eminent ambassador of music. Envisioned as a cornerstone for regional, cultural, and economic development, the Center serves as a cultural crossroads for visitors, students, and residents.

The Earl Scruggs Center explores Mr. Scruggs innovative career and the community that helped shape it, while celebrating how he crossed musical boundaries and defined the voice of the banjo to the world. For more information: http://www.earlscruggscenter.org

This article uses material from the article Earl Scruggs from the free encyclopedia Wikipedia and it is licensed under the GNU Free Documentation License.