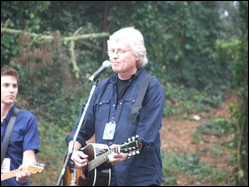 James Wesley Voight (born March 21, 1940), better known by the stage name Chip Taylor, is an American songwriter, noted for writing "Angel of the Morning" and "Wild Thing." He is the brother of actor Jon Voight and geologist Barry Voight and the uncle of actress Angelina Jolie and actor James Haven.

After an unsuccessful attempt to become a professional golfer, Taylor entered the music business, writing pop and rock songs, both alone and with other songwriters, including Al Gorgoni (as the duo Just Us), Billy Vera, Ted Daryll, and Jerry Ragovoy.

Taylor's best-known songs are "Wild Thing," which, though originally recorded in 1965 by Jordan Christopher & The Wild Ones, became famous as both a 1966 hit single for The Troggs and a 1967 live performance by Jimi Hendrix, and "Angel of the Morning," likewise originally recorded by Evie Sands in 1967, but becoming a hit for Merrilee Rush in 1968, and then a million-selling single in 1981 for country-pop singer Juice Newton.[2] Other notable pop and country songs written by Taylor include "He Sits at Your Table" (Willie Nelson), "I Can't Let Go" (Evie Sands, The Hollies, Linda Ronstadt), "The Baby" (The Hollies), "Worry" (Johnny Tillotson), "Make Me Belong to You"(Barbara Lewis), "I Can Make It With You" (The Pozo Seco Singers, Jackie DeShannon), "Any Way That You Want Me" (The Troggs, Evie Sands, Juice Newton, Lita Ford), "Step Out of Your Mind", "Country Girl City Man" (Billy Vera and Judy Clay), "I'll Hold Out My Hand", "Try (Just a Little Bit Harder)" (Janis Joplin), "Julie" (Bobby Fuller Four, Marshall Crenshaw), "Lonely Is As Lonely Does" (The Fleetwoods), "Sweet Dream Woman" (Waylon Jennings), "A Little Bit Later On Down the Line" (Bobby Bare) and "Son of a Rotten Gambler" (Emmylou Harris, the Hollies, Anne Murray).

In 2009, Ace Records released a compilation CD of some of Taylor's compositions as recorded by other artists (Wild Thing: The Songs of Chip Taylor)

Taylor's first releases were on the King label and their subsidiary DeLuxe. In 1958 Wes Voight and the Town Three released two 45's on DeLuxe, numbers 6176 "Midnight Blues" and 6180 "I Want A Lover". In 1959 he recorded for King as Wes Voight on 5211 "I'm Loving It", and his final recording as Wes Voight on King 5231 "I'm Ready to Go Steady" and "The Wind and the Cold Black Night". the two King 45's were released in both Mono and Stereo, making them some of the first stereo singles available. Taylor has released recordings on Warner Bros., Columbia, and Capitol. His most popular recording is Last Chance, on Warner Bros. In the mid-1970s, Taylor gave up the music business for a career as a professional gambler specializing in blackjack and horse-racing handicapping. But the year 1980 saw Taylor make an appearance in the film Melvin and Howard.

Taylor restarted his performing and recording career in 1993. At a South by Southwest Music Conference in Austin, Texas in 2001, Chip met singer and violinist Carrie Rodriguez, with whom he performed and recorded Americana music for several years. The duo recorded Let's Leave This Town in 2002. They released The Trouble With Humans the following year and the critically acclaimed Red Dog Tracks in 2005. Each has since released successful solo albums. Taylor's double-CD Unglorious Hallelujah/Red Red Rose, his first solo album in five years, was quickly hailed as "a future classic" by Sonic Magazine, whose reviewer declared: "This is the best we've heard from Chip Taylor so far." Rodriguez's solo album, Seven Angels on a Bicycle, was released in August 2006. In late 2006 and early 2007, Rodriguez toured on her own but continued to perform with Taylor from time to time.[3]

Taylor has also performed with alt-country singer-songwriter Robbie Fulks, playing bass for Fulks's January 2004 date at Double Door in Chicago. Taylor has done a series of shows with guitarist John Platania and the young singer/fiddler Kendel Carson, and he produced both their 2007 albums. In addition, the reggae rap star Shaggy utilized "Angel of the Morning" as the basis for his hit "Angel" in 2001. The song also used the drum intro and bass line of the Steve Miller song "The Joker"."Angel of the Morning" has sold over 13 million copies worldwide.

Chip Taylor´s album "Yonkers, NY" was in 2011 nominee for Grammy Award, for best recording package but lost to "Brothers" by The Black Keys.[4]

The 2011 indie film In the Family (by Patrick Wang) references and uses Chip Taylor's music and includes an appearance by the songwriter as "Darryl Hines".[5]

In 2007, Taylor launched his own independent label, Train Wreck Records.[6]

This article uses material from the article Chip Taylor from the free encyclopedia Wikipedia and it is licensed under the GNU Free Documentation License.