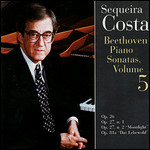 José Carlos de Sequeira Costa (born 18 July 1929, Luanda, Angola) is a Portuguese pianist who is especially admired for his interpretations of the Romantic repertoire.

As a child, Sequeira Costa showed exceptional musical talent. When he was eight years old, he moved to Lisbon to become the protégé of José Vianna da Motta who was one of the last pupils of Franz Liszt. Following Vianna da Motta's death in 1948, Sequeira Costa continued his studies in London under another eminent pianist, Mark Hambourg. Sequeira Costa also worked with Marguerite Long and Jacques Fevrier in Paris and Edwin Fischer in Switzerland. Under these teachers, Sequeira Costa was immersed in both the German and French schools of pianism. In his performing career, Sequeira Costa has drawn upon his understanding of both traditions to develop his personal style of musical interpretation.

Today, Sequeira Costa continues to appear regularly on the panels of some of the world's most prestigious music competitions, while also delivering numerous master classes and giving regular tours. Sequeira Costa has recorded the complete cycle of piano concertos by Sergei Rachmaninoff, and has recently completed the final recording of the complete sonatas of Beethoven.

Since 1976, Sequeira Costa has served as the Cordelia Brown Murphy Distinguished Professor of Piano at the University of Kansas.

This article uses material from the article Sequeira Costa from the free encyclopedia Wikipedia and it is licensed under the GNU Free Documentation License.