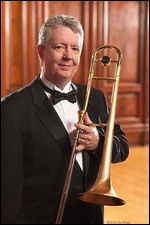 James Edward Pugh (born November 12, 1950) is a trombonist, composer, and educator. He is noted as the lead trombonist with Woody Herman's Thundering Herd (1972-1976) and Chick Corea's Return to Forever Band (1977-1978). For 25 years, he worked as a freelance trombonist in New York City. In recent years, he toured and recorded with the rock group Steely Dan, is a founding member of the Graham Ashton Brass Ensemble, and is on faculty as Distinguished Professor of Jazz Trombone at the University of Illinois at Urbana-Champaign.

Born in Camden, New Jersey and raised in Butler, Pennsylvania, Pugh began studying piano at age five and trombone at age ten. Before attending the Eastman School of Music, he studied trombone with Matty Shiner of Duquesne University in Pittsburgh, Pennsylvania. While at Eastman, Pugh studied with Emory Remington, Donald Knaub, Chuck Mangione, Ray Wright, and was awarded Eastman's coveted Performer's Certificate. After graduating from the Eastman School of Music, Pugh toured with the Woody Herman Band and with Chick Corea before settling to New York City, where he remained for 25 years.

As a performer and recording artist

Since the 1980s, Pugh became New York's top-call freelance trombonist for film scores, records, and music for television and radio advertising. He can be heard on more than four thousand recording sessions.

Pugh added his sound to feature film soundtracks including A League of Their Own, When Harry Met Sally, and Meet Joe Black; and on hit Broadway cast recordings such as City of Angels, Fosse and Victor/Victoria.

In 2003, Pugh re-premiered the Nathaniel Shilkret: Trombone Concerto at Carnegie Hall with Skitch Henderson and the New York Pops Orchestra. This mid-twentieth century work was written for Tommy Dorsey.

Pugh is the only recipient of the National Academy of Recording Arts & Science's Virtuoso Award for Tenor trombone, awarded after being voted Tenor Trombone MVP by the New York recording community for five years.

Pugh's original music and arrangements has been on National Public Radio, in film scores, on "jingles", and on record. Pugh wrote the theme music for Performance Today, the daily classical music program on public radio. His composition, Lunch with Schrödinger's Cat, received a Lincoln Center premier in 1989 by Marin Alsop and the Concordia Chamber Orchestra. Pugh premiered his "Concerto for Trombone and Orchestra" in May 1992 with the Williamsport Symphony. It received its New York premier in March 2000 with Joseph Alessi as soloist and Leonard Slatkin conducting the New York Philharmonic. A founding member of the Graham Ashton Brass Ensemble, Pughs compositions can be heard on a recent Signum CDs Scenes of Spirits and The Graham Ashton Brass Ensemble Plays The Music of James Pugh and Daniel Schnyder.

In the field of instrument development

2001: Pugh Mosso - CD recorded in Brisbane, Australia with the ConArtists, big band from the Queensland Conservatorium

2004: Echano - CD recorded in Brisbane, Australia with the ConArtists, big band from the Queensland Conservatorium

2007: Holly and The Ivy - Montclair Citadel Band of the Salvation Army

1977: Musicmagic, with Chick Corea and Return to Forever

1988: The Disney Album, with Barbara Cook

1992: League of Their Own, with James Taylor

1999: Crossing the Bridge, with Eileen Ivers

1999: Songs from the Last Century, with George Michael

2000: Two Against Nature, with Steely Dan

2002: Looking for America, with Carla Bley

2003: Everything Must Go, with Steely Dan

2007: This Meets That, with John Scofield

Classical (not as soloist)

Ponder Nothing, The Chamber Music of Ben Johnston, Music Amici

The Music of Irwin Bazelon

This article uses material from the article James E. Pugh from the free encyclopedia Wikipedia and it is licensed under the GNU Free Documentation License.