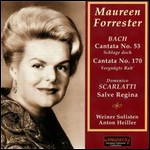 Maureen Forrester was born and grew up in a poor section of Montreal, Quebec. She was one of four children of Thomas Forrester, a Scottish cabinetmaker, and his Irish-born wife, the former May Arnold. She sang in church and radio choirs. At age 13, she dropped out of school to help support the family, working as a secretary at Bell Telephone.[1]

When her brother came home from the war he persuaded her to take singing lessons. She paid for voice lessons with Sally Martin, Frank Rowe, and baritone Bernard Diamant. She gave her debut recital at the local YWCA in 1953. Her accompanist was John Newmark, and thus was the start of a lifelong collaboration. She made her concert debut in Beethoven's Ninth Symphony with the Montreal Symphony Orchestra under Otto Klemperer.

She toured extensively in Canada and Europe with Jeunesses Musicales. She made her New York City debut in Town Hall in 1956. Bruno Walter invited her to sing for him; he was looking for the right contralto for a performance and recording of the Mahler Symphony No. 2 "Resurrection". This was the start of a warm relationship with great rapport. Walter had been a student of Mahler, and he trained Forrester in interpretation of his works. She performed at Walter's farewell performances with the New York Philharmonic in 1957.

In 1957, she married the Toronto violinist and conductor Eugene Kash. The couple had five children. Forrester converted to Judaism.[2] Maureen Forrester was known for her affinity for the music of Mahler and for her great stamina, often giving up to 120 performances a year while raising her five children.

She performed regularly in concert and opera. At the New York City Opera, she sang Cornelia in Handel's Giulio Cesare (1966), opposite Norman Treigle and Beverly Sills, which was recorded by RCA in 1967. She sang at the Metropolitan Opera in New York in 1975 in Das Rheingold, Siegfried, and Un ballo in maschera.[3] Forrester also provided the voice of the Bianca Castafiore character in the television series The Adventures of Tintin.[4][5]

She was a strong champion of Canadian composers, regularly scheduling their works in her programs, especially when she toured abroad. From 1983 to 1988 she served as Chair of the Canada Council.[6]

This article uses material from the article Maureen Forrester from the free encyclopedia Wikipedia and it is licensed under the GNU Free Documentation License.