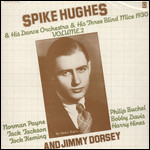 Hughes' small recording group was one of the earliest artists signed to Decca Records in England, spanning the period from 1930 to 1933, including over 30 sessions. Originally billed as Spike Hughes and his Decca-Dents, he reportedly did not like the name and after three sessions was changed either "his Dance Orchestra" or "his Three Blind Mice" for smaller sessions. His recording career culminated in his visit to New York City where he arranged three historic recording sessions involving members of Benny Carter's and Luis Russell's orchestras with Coleman Hawkins and Henry "Red" Allen from Fletcher Henderson's band. These fourteen sides were mostly Hughes' own compositions.[2] Though most were not released in the U.S. at the time, they have become known as classic jazz masterworks,[3] and are still available on CD.

After the New York recordings, he was a writer, regular BBC broadcaster and a critic for the rest of his life. His subjects included music (especially opera), food, and travel. In between his more serious works, he produced his series of "The Art of Coarse...." studies which opened with The Art of Course Cricket in 1954 and was followed over the years by ...Course Travel, ...Gardening, ...Bridge, ...Cookery and ..Entertaining. The series was named as a play on Coarse fishing; other later Coarse books were written by Michael Green.

In 1955 Hughes and his third wife, Charmian (née Finch Noyes) moved from London to a 17th Century farmhouse at Ringmer, Sussex, near Glynde, where they lived until his death in 1987. He had been one of the first music critics to visit the early performances at Glyndebourne Festival Opera in 1934, and made many contributions to Glyndebourne, including writing programme notes, providing surtitles for television performances, and publishing the first history of the Opera.

This article uses material from the article Spike Hughes from the free encyclopedia Wikipedia and it is licensed under the GNU Free Documentation License.

Ernst Eichner 1. Satz aus dem Oboenkonzert Nr. 3 C-Dur
Update Required To play the media you will need to either update your browser to a recent version or update your Flash plugin.