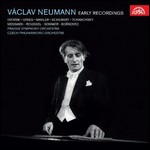 Neumann was born in Prague, where he studied at the Prague Conservatory with Josef Micka (violin), and Pavel Dědeček and Metod Doležil (conducting). He co-founded the Smetana Quartet, playing 1st violin and then viola, before conducting in Karlovy Vary and Brno. In 1956, he began to conduct at the Komische Oper in Berlin, leaving in 1964 to become conductor of the Leipzig Gewandhaus Orchestra. He stayed there until 1968, when he became principal conductor of the Czech Philharmonic, a post he held until 1990.

Neumann taught conducting at the Prague Academy for Music, where his students included Oliver von Dohnányi and Vítězslav Podrazil.

Neumann was particularly noted as a champion of Czech music, and made the first studio recording of Leoš Janáček's opera The Excursions of Mr. Brouček in 1962.

Neumann can be seen conducting the Czech Philharmonic in a recording of the Dvořák Cello Concerto with Julian Lloyd Webber. This is featured in the 1988 film Dvorak - In Love? by director Tony Palmer.

This article uses material from the article Václav Neumann from the free encyclopedia Wikipedia and it is licensed under the GNU Free Documentation License.

Felix Weingartner Adagio aus der Sinfonie Nr. 6 h-moll op. 74 "Tragische"
Update Required To play the media you will need to either update your browser to a recent version or update your Flash plugin.