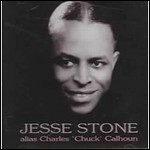 Jesse Albert Stone (November 16, 1901 – April 1, 1999)[1] was an American rhythm and blues musician and songwriter whose influence spanned a wide range of genres. He also used the pseudonyms Charles Calhoun and Chuck Calhoun.

Ahmet Ertegün once stated that "Jesse Stone did more to develop the basic rock 'n' roll sound than anybody else."[2]

Born in Atchison, Kansas, United States, Stone grew up in Kansas, where he was influenced by a wide array of styles. He came from a musical family who put on minstrel shows, and performed with a trained dog act at the age of 4. By 1926 he had formed a group, the Blue Serenaders, and cut his first record, "Starvation Blues", for Okeh Records in 1927. For the next few years he worked as a pianist and arranger in Kansas City, recording with Julia Lee among others, and then in the 1930s organised a larger orchestra.

Duke Ellington got Stone's orchestra booked at the Cotton Club in 1936, and Ellington put Stone up free of charge in his apartment for four months. Over the next few years Stone worked as a bandleader at the Apollo Theatre, and more widely in Harlem as a songwriter and arranger, with Chick Webb's band (which included Louis Jordan), Jimmie Lunceford, and many others. He made some recordings under his own name in the 1930s and 1940s.

In 1941, Stone became musical director for the all-female band, the International Sweethearts of Rhythm. He left after two years.

In 1945, with his friend Herb Abramson, he joined National Records, and two years later the pair joined the staff at Atlantic Records. At the time, Stone was the only black person on the Atlantic payroll.

Stone worked for Atlantic as a producer, songwriter, and arranger. During a trip to the South in 1949 with Ahmet Ertegün and Herb Abramson, Stone discovered that Atlantic's records were not selling in the southern states because they lacked a certain danceable quality. Stone later said: "I listened to the stuff that was being done by those thrown-together bands in the joints down there, and I concluded that the only thing that was missing from the stuff we were recording was the rhythm. All we needed was a bass line. So I designed a bass pattern, and it sort of became identified with rock'n'roll - doo, da-DOO, DUM; doo, da-DOO, DUM - that thing. I'm the guilty person that started that."[2]

In 1953 he wrote Ray Charles' hit "Losing Hand" (1953), and also wrote "Money Honey", which became the first hit record for The Drifters, topping the national R&B chart for 11 weeks. The following year, he arranged "Sh-Boom" by The Chords.

On Ertegün's advice, Stone used the pseudonym of Charles E. Calhoun, a name appropriated from an unknowing local builder, on his BMI tunes to avoid conflict with his membership in the other music licensing society, ASCAP. His best-known composition as Calhoun was "Shake, Rattle and Roll". The song was first recorded by Big Joe Turner in 1954 for Atlantic and was a major hit for the rhythm and blues artist, often cited as one of the first rock and roll records. An even bigger success was a cover version of the song recorded later in 1954 for Decca Records by Bill Haley & His Comets. This version became one of the first rock and roll recordings to sell a million copies and be an international success (predating Haley's better-known "Rock Around the Clock" by nearly a year).

Stone also co-wrote "Flip, Flop and Fly" with Turner, which was another hit (Haley was also fond of the song and recorded it no less than three times during his career). Stone also had additional Haley connections: another Haley hit, 1955's "Razzle-Dazzle", was written by Stone under the Calhoun pseudonym. Stone is also credited as co-writer (along with James E. Myers a.k.a. Jimmy DeKnight, co-writer of "Rock Around the Clock") of "Rattle My Bones", a song recorded in 1956 by the Comets spin-off group, The Jodimars.

As a bandleader, Stone recorded several singles in the late 1940s and mid 1950s, on RCA Victor, Atlantic and other labels, either under his own name or as "Chuck", "Charles" or "Charlie" Calhoun.

In 1960, he served as arranger and orchestra director for a session for LaVern Baker which produced four songs including the hit "Bumble Bee".[3] In 1961, after a brief and temporary retirement, Stone was recruited to run Randy Records in Chicago. However, he left after a few years, moving first to New York and then Florida. In 1975, he married Evelyn McGee (1922–1996), formerly of the International Sweethearts of Rhythm.[1]

Stone was honored by the Rhythm and Blues Foundation in 1992 with a Pioneer Award. Stone died at age 97 in Altamonte Springs, Florida.[4]

This article uses material from the article Jesse Stone from the free encyclopedia Wikipedia and it is licensed under the GNU Free Documentation License.

Wolfgang Amadeus Mozart Ouvertüre zur Oper "Lucio Silla"
Update Required To play the media you will need to either update your browser to a recent version or update your Flash plugin.