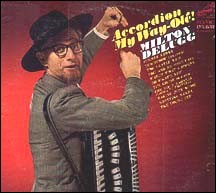 A talented accordionist, he appeared in short Soundies musicals and occasional movies (like 1949's Jolson Sings Again). He quickly became a successful arranger and composer and worked as band leader at Slapsy Maxie's Wilshire location in Hollywood. His clients ranged from the American Junior Miss Pageant to Jackie Wilson, and he was a musician on such radio programs as The Abe Burrows Show. One of his best-known tunes is an arrangement of the song "The Happy Wanderer", and his brassy polka "Hoop Dee Doo" became a game show staple. He is also the composer of "Hooray for Santy Claus", the catchy theme song for the low-budget motion picture Santa Claus Conquers the Martians. He also composed "Roller Coaster" - recorded by Henri Rene Orchestra on RCA Victor. It was used as the closing theme for the popular Goodson-Todman panel show What's My Line? from the early 1950s until its cancellation in 1967.

In 1950 and 1951, DeLugg was musical director, bandleader, and accordionist on Broadway Open House an NBC late-night television program which has been considered a forerunner to The Tonight Show. He often played a song he co-wrote, titled, "Orange Colored Sky", which was best remembered as a hit for Nat King Cole. In 1950, DeLugg was also orchestra conductor for the short-lived Abe Burrows' Almanac.

In 1953, he played accordion, leading the Milton DeLugg Trio on the short-lived The Bill Cullen Show.[1] Four years later, in 1957, DeLugg joined the cast of the Winchell and Mahoney Show.

For decades, DeLugg has been associated with NBC as a musical director. In 1966, he was briefly musical director of The Tonight Show Band during the tenure of Johnny Carson.

DeLugg enjoyed a long association with Chuck Barris, beginning as arranger of the original theme to The Newlywed Game in 1966. From 1976 to 1980, he was musical director of The Gong Show (appearing with his "Band With a Thug"). DeLugg often appeared on the show as a comic foil, in the characters of bad joke teller Naso Literatus and philosopher Old Drool. DeLugg's venerable "Hoop Dee Doo" became a fixture on The Gong Show, and was used whenever the contest winner was chosen.

DeLugg also wrote the theme music for other Barris projects including The $1.98 Beauty Show, Camouflage (where, in a throwback to an earlier era of game shows, the music was actually performed live by DeLugg and his band), Leave It to The Women, Three's a Crowd, and The New Treasure Hunt. He also recorded new versions of the theme songs to the 1970s versions of The Dating Game and The Newlywed Game, as well as providing the themes for their 1980s revivals. DeLugg and sidemen Mark Stevens, Billy Neale and Ray Neapolitan appeared in Chuck's The Gong Show Movie (1980) as The Hollywood Cowboys.

This article uses material from the article Milton DeLugg from the free encyclopedia Wikipedia and it is licensed under the GNU Free Documentation License.