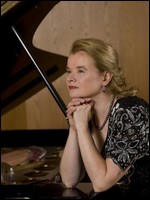 Artymiw has been successful on the international competition circuit. She won third prize in the 1978 Leeds competition (UK) and was a finalist in the 1976 Leventritt competition (USA), a year in which no first prize was given.

Lydia Artymiw is Distinguished McKnight Professor of Piano at the University of Minnesota. She has recorded for Chandos, Centaur, Pantheon, Artegra, and Bridge.

This article uses material from the article Lydia Artymiw from the free encyclopedia Wikipedia and it is licensed under the GNU Free Documentation License.