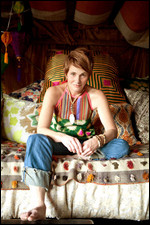 Shawn Colvin (born January 10, 1956) is an American singer-songwriter and musician. While Colvin has been a solo recording artist for nearly 30 years, she is perhaps best known for her 1997 Grammy-winning song, "Sunny Came Home".

Colvin was born in Vermillion, South Dakota, and spent her youth in Carbondale, Illinois and London, Ontario, Canada.[1] She is the second of four children.[2] She learned to play guitar at the age of 10[1] and grew up listening to her father's collection of music, which included artists such as Pete Seeger and the Kingston Trio.[3]

Colvin moved to Austin, Texas and joined a Western swing band called the Dixie Diesels. She then entered "the folk circuit in Illinois and Berkeley", California[4] before straining her vocal cords and taking a sabbatical at the age of 24.[1]

While participating in off-Broadway shows such as Pump Boys and Dinettes[1] she was featured in Fast Folk magazine, and in 1987, producer Steve Addabbo hired her to sing backup vocals on the song "Luka" by Suzanne Vega.[1][4]

After touring with Vega,[4] Colvin signed a recording contract with Columbia Records[1][4] and released her debut album Steady On in 1989. The album won a Grammy Award for Best Contemporary Folk Album.[1] Colvin's second album Fat City was released in 1992 and received a Grammy nomination for Best Contemporary Folk Recording. Her song "I Don't Know Why" was nominated for a Grammy in the Best Female Pop Vocal category.[1] In 1993 she moved back to Austin and in 1994 released the album Cover Girl.[4] In 1995 Colvin released her album Live 88 a collection of live recordings from 1988.[6]

In 1996, Colvin released her album A Few Small Repairs and in 1997 the success of her single "Sunny Came Home" catapulted her into the mainstream after spending four weeks at the number one spot on the Adult Contemporary chart.[1][7] The song won the 1998 Grammy Awards for both Song and Record of the Year.[1] Colvin released the album Holiday Songs and Lullabies in 1998 and in 2001 released another album called Whole New You. In 2004, she released a compilation of past songs called, Polaroids: A Greatest Hits Collection.[1]

In 2008, Colvin left Columbia Records and released a 15-song album called These Four Walls on her new label, Nonesuch Records, which featured contributions by Patti Griffin and Teddy Thompson.[8] In 2009 she released Live, which was recorded at the jazz club Yoshi's in San Francisco, California.

Colvin's eighth studio album, All Fall Down, was released in 2012 and was produced by Buddy Miller at his home studio in Nashville, Tennessee. The album featured guest appearances by Emmylou Harris, Alison Krauss and Jakob Dylan.[1] Colvin published her book of memoirs, Diamond in the Rough, in 2012.[9] In 2016 she recorded an album with Steve Earle called, Colvin and Earle.[10][11][12] For the 20th Anniversary of A Few Small Repairs the album will be reissued and Colvin will be embarking on the A Few Small Repairs 20th Anniversary Tour

Colvin has made vocal contributions to songs by James Taylor, Béla Fleck, Edwin McCain, Shawn Mullins and Elliott Murphy and collaborated with Sting on the song "One Day She'll Love Me".[1] Colvin played the voice of character Rachel Jordan on the TV show The Simpsons[13] and lent her vocals to Mary Chapin Carpenter's 1992 recordings, "The Hard Way" and "Come On Come On".[14]

This article uses material from the article Shawn Colvin from the free encyclopedia Wikipedia and it is licensed under the GNU Free Documentation License.

Gioachino Rossini Introduktion, Thema und Variationen Es-Dur
Update Required To play the media you will need to either update your browser to a recent version or update your Flash plugin.