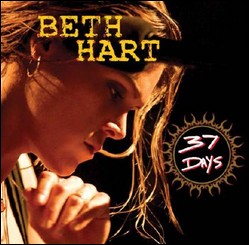 Beth Hart (born January 24, 1972) is an American singer, songwriter and musician from Los Angeles, California, United States. She rose to fame with the release of her 1999 single "LA Song (Out of This Town)" from her second album Screamin' for My Supper. The single was a number one hit in New Zealand, and reached the top five on the US Adult Contemporary chart, and number 7 on the Billboard Adult Top 40 Chart. Subsequent albums, namely Seesaw and Live In Amsterdam by Beth Hart and Joe Bonamassa, achieved number 1 status on the Billboard Blues Album Chart. Hart's release Bang Bang Boom Boom rose to number 3 on the Billboard Blues Album Chart, as well as the album Don't Explain by Hart and Bonamassa. The album Seesaw rose to number 8 on the Billboard Top Independent Album Chart. Hart has had two number 1 singles in Denmark "As Good As It Gets" and "Learning To Live", as well a platinum selling album, Leave The Light On.

Hart's first album with Bonamassa, Don't Explain, went gold in the Netherlands. In 2014 Hart was nominated for a Grammy Award for Seesaw and she was also nominated for a Blues Music Award in the category 'Best Contemporary Blues Female Artist'.

Hart started performing when she was 15, and as an attempt to earn money she started off by participating in competitions around South Central L.A., where she earned a steady job at the La Louisianne club.[1] While playing the Los Angeles clubs, Hart enlisted bassist Tal Herzberg and guitarist Jimmy Khoury.[2][3] In 1993, Hart appeared on Ed McMahon's Star Search several times, ultimately winning the Female Vocalist competition for that season. Beth Hart and the Ocean of Souls was recorded in 1993. It includes "Am I the One" (which later appeared on her first official record "Immortal") and a pop-rock cover of the Beatles' "Lucy in the Sky with Diamonds".

The first released album with the Beth Hart Band[3] was called Immortal (Atlantic, 1996) and featured the single "God Bless You". It also included "Am I The One", a fan favorite that ended up on her first DVD that was released in 2005, which fans still speak about to this day, in particular that performance of "Am I The One".

Screamin' for My Supper: Career breakthrough

Her next album, Screamin' for My Supper (Atlantic, 1999), featured "LA Song (Out of This Town)", a #1 hit in New Zealand and a top 5 Adult Contemporary chart hit. At the same time, Hart was singing the lead role in Love, Janis, an off-Broadway musical based on Joplin's letters home to her sister. The song also aired during Episode 17 of the 10th and final season of Beverly Hills, 90210.[4]

Leave the Light On

Hart's Leave the Light On was released in 2003. The single "Learning To Live" was a number 1 hit in Denmark, as well a platinum selling album. "Learning to Live" was also used as the theme song to Losing It With Jillian on NBC.

Hart followed this up with her live album Live at Paradiso in 2005, which was recorded at a church in Amsterdam, Netherlands and released as a CD and a DVD. It featured a variety of Hart's self written songs and the cover of "Whole Lotta Love" by "Led Zeppelin".[5]

Hart's fourth solo studio album, 37 Days was released in Europe in July 2007. It produced the number 1 single in Denmark "As Good As It Gets". "37 Days" was also released as a DVD.

A fifth solo studio album, My California was released in 2010. Hart delivered music to the end-scene of the last episode of Californication season 6, with the title song of this record "My California",. On August 23, 2012, her song "Take It Easy on Me" from My California was used in the first episode of the eighth series of the BBC TV drama Waterloo Road. On July 31, 2012, Hart released My California in the United States. On the same date, she released an EP titled Introducing Beth Hart.

In 2011, Hart collaborated with blues guitarist Joe Bonamassa on their first co-release, "Don't Explain", an album of blues classics. The album reached number 3 on the Billboard Blues Album Chart. It also went gold in The Netherlands.[6]

Hart's release Bang Bang Boom Boom (2012) rose to number 3 on the Billboard Blues Album Chart.[7] She worked with producer Kevin Shirley on this, whom she collaborated with for the first time on the album "Don't Explain". The album was released the following year in the United States.

In 2013, the duo Beth Hart and Joe Bonamassa released Seesaw, again produced by Kevin Shirley. The album rose to number 8 on the Billboard Top Independent Album Chart. In 2014 Hart was nominated for a Grammy Award for Seesaw and she was also nominated for a Blues Music Award in the category 'Best Contemporary Blues Female Artist'.[8]

Hart's 7th solo studio album Better Than Home, was released on April 13, 2015 in Europe and April 14 in USA. The single "Mechanical Heart" charted No. 1 in the "iTunes Blues" song list.[9] The album entered the album charts in the Netherlands at number 1. In the USA, the album entered both the Billboard Blues Charts and iTunes Blues Charts at No. 1. The album also charted in other countries, such as number 11 in Germany and 33 in the UK. On January 29, 2016, Hart and Jeff Beck released the single "Tell Her You Belong To Me" worldwide on iTunes,[10] after performing the song live on Jools' Annual Hootenanny on 2015/2016 on BBC Two. They also performed "Nutbush City Limits" on that show.

Fire on the Floor

Hart released her latest studio album, Fire on the Floor, on October 14, 2016 in Europe, New Zealand and Australia. For the rest of the world it was released [11]on February 3, 2017 to coincide with her tour and promo schedule. Hart wrote all songs herself, except for Let's Get Together (with Rune Westberg) and Fat Man (with Glen Burtnik).[12] The title track was released first followed by "Love Is a Lie", which is the official first single of the new album.

Other works and collaborations

In 2003, she became the first and only musician to feature as backing vocalist for a Deep Purple song ("Haunted", released on the Bananas album).

Hart collaborated on a song with Slash called "Mother Maria", released on the iTunes version of Slash's solo album, Slash.

In 2011, she worked with Joe Bonamassa, first providing vocals for the track "No Love on the Street" on his album Dust Bowl (March 2011), and on a 2011 album of blues classics, entitled Don't Explain. The duo released Seesaw in 2013.

Hart collaborated with Born on the single "It Hurts", released in February 2012.

After touring with Jeff Beck in 2006 through the United States she appeared with him again in December 2012, at the Kennedy Center Opera House, along with a group of blues/rock musicians, performing "I'd Rather Go Blind" in tribute to Buddy Guy, who received a 2012 Kennedy Center Honor for his lifetime of contributions to American culture. This performance led to the collaboration with Buddy Guy, he recorded the song "What You Gonna Do About Me" with Beth Hart for his album Rhythm & Blues.

In 2014, she performed with Jeff Beck during his Australian tour as a supporting act, joining him on stage during his set.

Hart is one of the narrators for the 2015 documentary film Unity.[13]

Hart is married to her road manager Scott Guetzkow,[16] and currently resides in Los Angeles. Hart is not only a versatile vocalist, she also plays various instruments: piano, guitar, cello, bass guitar and percussion.[17] Her band includes guitarist Jon Nichols, bassist Bob Marinelli, and drummer Bill Ransom.[18] David Wolff is Hart's manager, and her tour and production manager is her husband, Scott Guetzkow.[19] Hart has overcome drug addiction,[20] but took control of her life and medical issues by finding religion and practicing transcendental meditation.[21]

This article uses material from the article Beth Hart from the free encyclopedia Wikipedia and it is licensed under the GNU Free Documentation License.