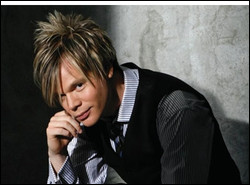 Brian Culbertson was born in Decatur, Illinois. As a child, he was musically skilled, having started playing piano at age 8, drums at 9, trombone at 10, bass in 7th grade, euphonium in high school and more.[1] As a boy, he would also make his own "songs" with various equipment until he saved enough money for a 14" color monitor and Macintosh IIci.

Growing up, he listened to Sting, The Yellowjackets, George Duke, David Foster, Marcus Miller, David Sanborn, Chicago and Earth, Wind and Fire.[1] He attended and graduated MacArthur High School,[2] where his father was a music teacher.[1] He then moved to Chicago where he attended DePaul University.[3] It was in college that he actually started working on a CD, gathering a group of musicians, recording a demo tape and sending it to the only person he knew in Los Angeles, Bud Harner, who would get him his first record deal.[4]

He is married to Michelle Culbertson,[5] also known by her stage name Micaela Haley, and they live in Los Angeles, CA. In an interview, Culbertson revealed that he met his wife in college through his first bass player Sharay Reed who had met Michelle at the World of Music Festival in Nashville, Tennessee where they both won awards at the age of 16. Michelle, originally a violinist, won for Best Concert Master and Sharay Reed for Best Soloist. They both were reintroduced to one another at DePaul University two years later. At the end of their Freshman year together Sharay introduced Michelle to Brian telling them that they would make a good match.[6][7] His wife contributed background vocals on his earlier albums and a feature vocal on his Christmas CD, A Soulful Christmas.[8]

Michelle and Brian have worked together on many projects. The first of which were commercials for McDonald's, Nintendo and State Farm to name a few during Brian's years as a commercial writer under Cliff Colnot. They went on to work on the album Be Still my Soul originally for Pianodisc which was then released as a solo project under their joint record label. In 2008 RCA classical and pop division took notice of a demo that Michelle and Brian had worked on together that was a hybrid of opera and electronica. RCA pop division was bought up by Jive records but Michelle and Brian continued work on their project which became Syren. Michelle changed her name to Micaela Haley for the record due to the genre switch of the Be Still my Soul album and the musical theatre album "Michelle Culbertson Sings Broadway Favorites" that was done for [9]

Culbertson plays Mason & Hamlin pianos and Roland keyboards[10] and has appeared at the NAMM Show.[11]

Culbertson has written and produced over 28 #1 contemporary smooth singles on the R&R, Gavin and Billboard Radio charts. Singles include "So Good" and "On My Mind" from Secrets, "Get It On" and "All About You" from Nice & Slow, "Hookin' Up" and "Let's Get Started" from It's on Tonight, "Always Remember" from Bringing Back The Funk, "That's Life" from XII, "Your Smile" from Dreams, "Think Free" from LIVE - 20th Anniversary Tour, "Been Around The World" from Funk! in addition to many more with other artists such as Norman Brown, Bob James, Dave Koz, Eric Marienthal, Rick Braun, Steve Cole, Eric Darius and Michael Lington.

In 2013, he announced on his blog that he was working on his fourteenth album,[12] the album Another Long Night Out was released on February 25, 2014 and was going to revisit his earlier roots in contemporary jazz. In 2015, he released a second live album "20th Anniversary Tour" while performing at jazz club Yoshi's[13] and, subsequently, he also released a solo piano album for yoga and meditation.[14] Brian released his 15th album in 2016, Funk! which was followed up with a world tour. In September 2017, Culbertson announced his Indiegogo campaign for his Colors of Love[15] album, released on Feb. 14, 2018. The Colors of Love tour was a U.S. tour lasting from March 2018 to June 2018.

In late 2011, Culbertson announced he would be hosting the first annual Brian Culbertson Napa Valley Jazz Getaway at the Napa Valley Opera House on June 7–10, 2012.[16] Brian along with his wife, Michelle Culbertson (Micaela Haley) began working on the Napa Valley Jazz Getaway together after having spent their 10th wedding anniversary in the region. .[17] The 4-day concert event would include live performances by comedian Sinbad, vocalists Oleta Adams and Kenny Lattimore, as well as artists Eric Marienthal, Eric Darius, and David Benoit. In addition to performances, Culbertson curated the weekend's events to include food and wine events at his favorite Napa establishments including: Cindy Pawlcyn's Brassica restaurant, Miner Family Vineyards, Silver Oak Cellars, Caldwell-Snyder Art Gallery, and Silo's Napa.[18]

He has been touring steadily since the release of his first record in 1994 and has done well over 1,000 concerts around the world. In October 2013, he once again hosted a smooth jazz cruise (he hosted the "Brian Culbertson All-Star Smooth Jazz Cruise" in January 2007) called The Smooth Jazz Cruise – West Coast Edition. This time, he co-hosted the cruise with Boney James. The cruise sailed out of San Diego Oct 12–19, 2013. Brian has toured with his band plus many others including Dave Koz on several summer and Christmas tours including a 2009 summer duet tour called "Side By Side", David Sanborn on a duet tour called "The DREAM Tour" in the summer of 2012, David Benoit on a piano duet tour called "piano2piano" in 2012 with more dates in 2013, four of his own "A Soulful Christmas" tours from 2006–2009 which featured guest artists Gerald Albright, Bobby Caldwell, Warren Hill, Eric Darius, Ray Parker Jr., Nick Colionne, Mike Phillips, Howard Hewett and Michael Lington. He has also toured with Michael McDonald, James Ingram, Norman Brown, Patti Austin, Chris Botti, Marc Antoine, Wayman Tisdale and others. For several years, Culbertson was a regular opening act and performed with Barry Manilow on his arena shows from 2008–2012. Culbertson has always featured saxophonists in the band starting with Steve Cole in the early days, Eric Marienthal here and there, Michael Lington from 2003–2006 and 2009, Eric Darius from 2006–2008 and Marqueal Jordan from 2009 through the end of the Colors of Love tour in 2018. On July 17, 2018, it was announced that Marqueal Jordan would be leaving the band to pursue a solo project.

This article uses material from the article Brian Culbertson from the free encyclopedia Wikipedia and it is licensed under the GNU Free Documentation License.

Ignacy Jan Paderewski Nocturne B-Dur op. 16 Nr. 4
Update Required To play the media you will need to either update your browser to a recent version or update your Flash plugin.