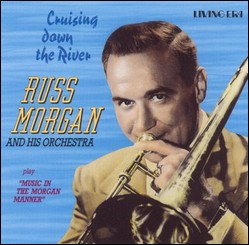 Russ Morgan may also refer to a member of dance music group K-Klass.

Russ Morgan (April 29, 1904 – August 7, 1969) was a big band orchestra leader and musical arranger in the United States during the 1930s and 1940s. He was one of the composers of "You're Nobody til Somebody Loves You" along with Larry Stock and James Cavanaugh. Morgan was the first to record the song.

Born into a Welsh family in Scranton, Pennsylvania, Morgan was encouraged to express himself musically from the age of seven. His father, a coal-mine foreman, was a former musician who played drums in a local band in his spare time. Morgan's mother had been a pianist in a vaudeville act. Morgan began to study piano and also went to work in the mines to earn money to help support his family and pay for his lessons.[1]

At fourteen, Morgan earned extra money as a pianist in a theater in Scranton. He also purchased a trombone and learned to play it. In 1921, he played trombone with a local band, the Scranton Sirens, which became popular in Pennsylvania during the 1920s. Several of its members later became famous, including Jimmy Dorsey on sax and clarinet, Billy Lustig on violin and Tommy Dorsey on trombone (who took Morgan's place when he left the organization).[1]

In 1922, Morgan decided to go to New York. Three years later, at the age of twenty-one, he did arrangements for both John Philip Sousa and Victor Herbert. He then joined Paul Specht's orchestra and toured throughout Europe with the orchestra. Colleagues of Morgan in Specht's orchestra included Arthur Schutt, Don Lindley, Chauncey Morehouse, Orville Knapp, Paul Whiteman, Charlie Spivak and Artie Shaw.[1]

On his return from Europe, Jean Goldkette invited Morgan to Detroit to organize, lead and arrange for his new band. Some members of the all-star Goldkette orchestra were his old associates. The band included Tommy and Jimmy Dorsey, Chauncey Morehouse, Joe Venuti, Eddie Lang, Bix Beiderbecke and Fuzzy Farrar.[1]

Morgan first records were made for OKeh in mid 1930 exclusively for their short lived Parlophone PNY and Odeon ONY series, usually under the name Russell Brown and his Orchestra. During the early 1930s, Morgan joined the group of anonymous studio groups recording pop tunes for the dime store labels (including Banner, Melotone, Oriole, Perfect, Romeo, Conqueror, Vocalion, and (probably) the rare gold Domino labels.

For a short time in 1934, Morgan arranged for Fletcher Henderson's Orchestra. In 1935, he played trombone with the Original Dixieland Jazz Band when they recorded four sides for Vocalion. On September 12, 1935, Morgan playing piano and Joe Venuti on violin cut two sides for Brunswick, Red Velvet and Black Satin. Most of the songs were written by Morgan and Venuti.

Morgan's biggest success came when he was offered the position of Musical Director for Detroit Radio Station WXYZ. His show, "Music in the Morgan Manner", became one of the most popular radio shows. At one time, during his radio run, he was directing nine commercial programs. While in Detroit, he arranged for the Detroit 102 piece Symphony Orchestra demonstrating his varied musical experience and ability.[1]

In the early 1930s, Morgan was in an automobile accident that almost ended his career. After several months in the hospital he started again in New York City as arranger for bands like the George White Scandals, The Cotton Club Revue and the Capitol Theatre. When not arranging for the Broadway shows, Morgan worked with leading orchestras in New York, such as Phil Spitalny, Eddie Gilligan, Ted Fio Rito and Freddy Martin, as pianist and/or trombonist.

He joined the Freddy Martin Orchestra in 1934 as a piano player, but worked chiefly as trombonist and arranger with the band. While with Martin's orchestra, he also was a musical director at Brunswick Records in New York, where he met Shirley Gray, whom he married in 1939.

While at Brunswick, Morgan met Rudy Vallee, who was impressed with Morgan's musical ability. He insisted he form an orchestra of his own. He then invited Russ to appear as a guest on his popular Fleishman Yeast radio show. Vallee was also instrumental in getting Morgan in his first engagement in New York City, along with his own orchestra at the Biltmore Hotel. This first engagement was indicative of the audiences' reaction to Morgan's appearances. He started with a four-week contract. But the contract extended and Morgan remained at the hotel for two years. In the next few years, he was able to add musical directorship to the Rinso-Lifebuoy Show on NBC for thirty-nine weeks and the Philip Morris radio series on NBC and CBS for two years to his growing list of achievements.

Some of his other triumphs were his record-breaking runs in famed hotels, ballrooms and theatres across the country. A few of these engagements were at the Biltmore Hotel, Los Angeles; Claremont Hotel, Berkeley, California; Edgewater Beach Hotel, Chicago; Aragon and Trianon, Chicago; Strand, Chicago; the Statler Hotel, New York; Orpheum, Los Angeles; Palladium, Hollywood; to name a few.

In 1949, four songs he recorded made it big on the charts. They were "So Tired", "Cruising Down the River", "Sunflower" and "Forever and Ever." On the latter he used a vocal quartet that was just starting out and would later become famous as the Ames Brothers. The Decca Records recording of Dogface Soldier, released to coincide with the film version of To Hell and Back, based on the best-selling novel by Audie Murphy, sold over 300,000 copies.

During the 1950s, his orchestra continued to be a popular one for dancing and listening music. He continued to set house records with his appearances in California and New York as well as his many tours across the entire nation. During this decade, it was mostly the long-established veteran "sweet bands" that were supplying the music for dancers, and Russ Morgan was one of them. The veterans included Jan Garber, Sammy Kaye, Wayne King, Guy Lombardo, Freddy Martin and Lawrence Welk.

In 1958, Morgan's nineteen-piece band had been reduced to eleven men, with his sons Jack Morgan on trombone and David Morgan on guitar. In 1965, he was then booked for an eight-week engagement at the Top O' The Strip at the Dunes Hotel in Las Vegas. However, it ended up lasting until 1977, a total of twelve years.

In 1969, Morgan died at the age of sixty-five in Las Vegas. Morgans son, Jack, took over the leadership and has led the band ever since. Morgan has a Star on the Hollywood Walk of Fame for his contributions to recording.

This article uses material from the article Russ Morgan from the free encyclopedia Wikipedia and it is licensed under the GNU Free Documentation License.