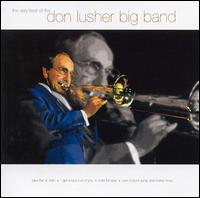 Don Lusher OBE (6 November 1923 – 5 July 2006) was a jazz and big band trombonist best known for his association with the Ted Heath Big Band. In a career spanning more than 60 years, he played trombone with a number of jazz orchestras and bands and was twice President of the British Trombone Society.

Lusher was born in Peterborough, Cambridgeshire and started playing the trombone aged six years old in his local Salvation Army band, the third generation of his family to do so. When World War II broke out he served as a gunner signaller in the Royal Artillery, after being demobbed he became a professional musician playing with the bands of Joe Daniels, Lou Preager, Maurice Winnick, the Squadronaires, Jack Parnell and lastly, the Ted Heath Big Band.

Lusher spent nine years as lead trombone with Ted Heath's Orchestra and toured the USA several times, taking over as leader in 1969 after Heath's death. He also led the trombone section on many of Frank Sinatra's European tours.

Lusher formed his own ensemble, the Don Lusher Big Band. He also performed with the Manhattan Sound Big Band, with Alexis Korner and various session musicians in the big band-rock fusion group CCS amongst others, and was a member of the Best of British Jazz group from the 1970s onwards.

He spent some years as a Professor of the Royal College of Music (Big Band) before becoming Professor of Trombone at the Royal Marines School of Music, Portsmouth in 1997, a post he retired from in 2004.

In 2001 Don recorded an album on the Decca label, it featured Kenny Ball, Acker Bilk, John Chilton and the Feetwarmers, John Dankworth, Humphrey Lyttelton and George Melly. It was entitled British Jazz Legends Together.

In 1993 he was awarded the status of Freeman of the City of London, and in 2002 Lusher received an OBE for services to the music industry.

This article uses material from the article Don Lusher from the free encyclopedia Wikipedia and it is licensed under the GNU Free Documentation License.

Wolfgang Amadeus Mozart Andante grazioso aus der Klaviersonate A-Dur KV 331
Update Required To play the media you will need to either update your browser to a recent version or update your Flash plugin.