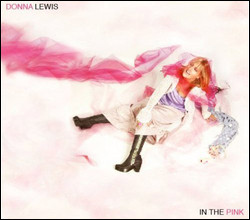 Donna Lewis is a Welsh singer-songwriter and record producer from Cardiff, Wales. She is best known for the 1996 pop hit single "I Love You Always Forever", which peaked at number five on the UK Singles Chart, and also peaked within the top ten of the charts in Australia, Austria, Canada, France, Germany, New Zealand, Norway, and the United States. In the latter country, "I Love You Always Forever" peaked at number two on the Billboard Hot 100 for nine weeks, having been held off the summit by the Bayside Boys Remix of "Macarena" by Los Del Rio. It also became the highest-charting single on the Billboard Hot 100 by a Welsh artist since Bonnie Tyler topped the chart with Total Eclipse of the Heart in 1983. Additionally, the single holds the record for being drawn for third place among songs with the longest runs at number two on the Billboard Hot 100 and at second for most weeks at number one on the Billboard Mainstream Top 40 chart. Lewis teamed up with Richard Marx in the 1997 adult contemporary hit "At the Beginning." In 1997, Lewis was nominated for the Brit Award for Best British Female.[1]

After releasing her second album Blue Planet, Lewis left Atlantic Records and independently released albums Be Still and In the Pink. Her album Brand New Day was produced by David Torn and featured Ethan Iverson, Reid Anderson and Dave King.[2][3][4]

There are conflicting accounts regarding Lewis's birth date. According to her biography on the Billboard and AllMusic websites,[5][6][7] written by employees of Rovi,[5][8] she was born on 6 August 1973. This date appears also on her BBC page.[9] The following information is consistent with all sources: Lewis was born in Cardiff. She began playing the piano at the age of six.[6] Her father, an amateur jazz pianist and guitarist[4] lent encouragement, and at 14, she began composing original songs.[6] Her formal training was at the Royal Welsh College of Music and Drama in Cardiff, where she majored in classical composition for piano and flute. Lewis then went on to teach music for a year in Sussex before moving to Birmingham to sing in a bar band.[6] During that time she set up a home studio[6][9] and began recording demos. She became a popular live attraction and circa 1993 began sending her demos to record labels.[6] Atlantic Records signed her in 1994.[6]

An article in People magazine from November 1996 presents a different timeline of these events. It states that Lewis's graduation from the Royal Welsh College took place in 1979 and that she played in piano bars throughout Britain and Europe for a period of five years, so like many people in the public eye, there may have been attempts to make her age appear younger than she really is.[10] In November 1996, she had been married for ten years to her road manager and "[gave] her age as in her 30s".[10] This information, if correct, would imply that she was born between 1957 and 1966. This is roughly consistent with a statement Lewis made in an interview in 2015: "When I was in the pop world [...], I wasn't a 19 year old—I was 30 or something like that."[3][4] The context suggests that this refers to the time when she got her Atlantic record deal. The biography on Lewis's own website[11] does not date events prior to 1996. An article in Entertainment Weekly from September 1996 states that Lewis "won't reveal her age — she and her husband/manager, Martin Harris, have been married for nine years, so 'you know I'm not 21'".[12]

Lewis recorded "At the Beginning" with Richard Marx for the 1997 film Anastasia. Her second LP, Blue Planet (1998), won critical acclaim, but it was largely overlooked by the public. Although it produced a minor hit in continental Europe and Asia, "I Could Be the One", and a U.S. No. 1 dance single, "Love Him", Lewis parted ways with Atlantic Records[9] and independently produced her third LP, Be Still (2002), which featured her on an almost entirely acoustic set. During the early 2000s, Lewis was featured as a guest vocalist on several trance music/house music recordings. Her fourth LP, In the Pink, was released in 2008; its first single was "Shout," which was included in the soundtrack to the Marian Quinn film 32A. Lewis also sang lead vocals for her side project, Chute, which released their debut EP in April 2010. In March 2015, she released Brand New Day, her first full-length LP in nearly a decade.

This article uses material from the article Donna Lewis from the free encyclopedia Wikipedia and it is licensed under the GNU Free Documentation License.